It looks like USA has proof that Russia and Iran was trying to disturb the elections? 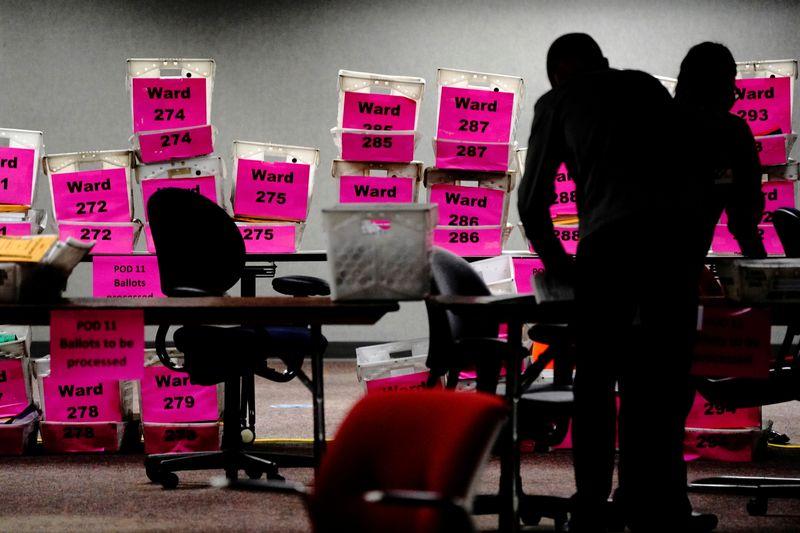 In other news, one of the rare times Trump does something that I actually find praiseworthy: 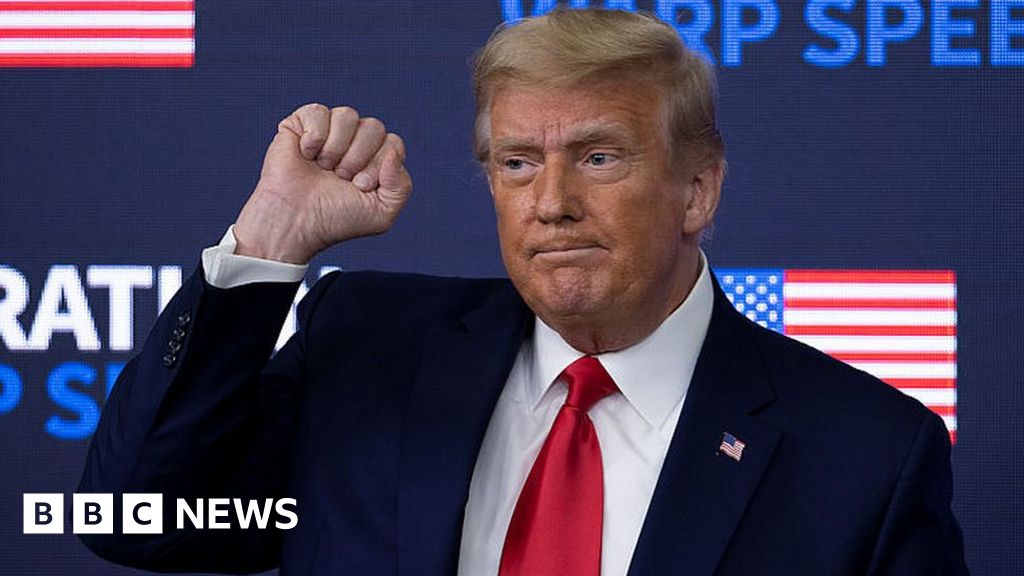 Many pro-Trump Republicans have expressed reluctance to take up the offer of a Covid-19 jab.
www.bbc.com

jtr1962 said:
It's way too early in his Presidency for his policies to have any far-reaching effects like that. The future is electric cars anyway, so by 2030 gas prices will be moot for the majority of people
Click to expand...

I beg to differ. He has taken aggressive action against fossil fuels starting with the cancellation of the permit for the Keystone XL pipeline on his first day in office, swiftly followed by rejoining of the Paris accord with additional aggressive cuts in carbon, and then executive action to suspend new oil and gas leases on Federal public lands.

“They are more direct, more fierce and quicker than what folks expected," one executive said.
fortune.com

Already seeing crazy activity in certain areas of the country where you can no longer use natural gas to heat new buildings. Then there's talk of getting rid of natural gas for power generation by 2035. Not sure where that capacity is going to come from afterwards. Batteries are great for handling peaks in demand and maintaining system stability as they can respond much faster than a gas peaker plant but are of little use for baseload generation. You need baseload generation when the sun isn't shining and wind output is low.

All of Bidens actions create significant risk to supply and demand, and therefore that risk is priced in.

Handruin said:
Two, the social media banning/silencing wasn't done in a vacuum. As if one day Twitter, etc flipped a switch off. No, there are real consequences to these people's actions regarding their big lie that the election was stolen or to promote violence and now that they lose this platform it's somehow infringing on their 1st amendment rights and/or they're being cancelled as a party. These are important details in the discussions of accounts being suspended. Private companies have terms of service. They agreed to them and broke them
Click to expand...

I would agree insofar as private companies being free to restrict speech as they see fit. But certainly what we saw with Parler and being shutdown by AWS shows the risk in putting your infrastructure in the hands of a company that can "turn off the lights" if it finds your content to be objectionable. Theres clearly still a space and need for private datacenters that arent swayed by political winds.

I agree it is a risk and this isn't a new problem when using private companies to host communications. People are free to say what they want. It doesn't mean there won't be consequences. This isn't a free speech issue in regards to the law though but this is how GoP is representing it to their base as is fox news. Amazon/AWS made a business decision that very well may be politically motivated but I have no doubt it's fundamentally profit-motivated due to risk of fallout from hosting a controversial platform known as Parler especially with ties to the capitol riots. That and somewhere in the details a EULA may have been broken? I haven't done a deep dive into their case or reasoning for dropping them.

After a month offline, the fight to restore Parler is over

In a response filing, Amazon revealed more than 100 violent threats the company had flagged to Parler in the weeks leading up to its takedown, including one that told Jack Dorsey, "you will die a bloody death." Parler had refused to moderate the content, citing its free speech policy.
Click to expand...

So apparently the reason used was failing to moderate. But what about Twitter and Facebook groups which arguable had more use for planning of the capitol riots?

My understanding is that during negotiations with AWS to resume services Parler offered to use some kind of Amazon owned content moderation tool, but AWS said that wasn't good enough....

Handruin said:
Amazon/AWS made a business decision that very well may be politically motivated but I have no doubt it's fundamentally profit-motivated due to risk of fallout from hosting a controversial platform known as Parler especially with ties to the capitol riots.
Click to expand...

The Washington Post, another Bezos owned entity is very much left leaning. And just recently issued a correction for making up complete shit in regards to Trumps call with Georgia elections investigator Frances Watson: 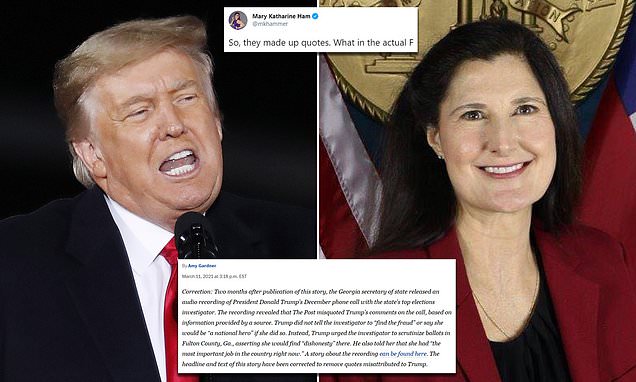 The Post issued a lengthy correction on Monday after audio of the December call between the then president and Frances Watson was released.

"'Trump did not tell the investigator to "find the fraud" or say she would be "a national hero" if she did so. Instead, Trump urged the investigator to scrutinize ballots in Fulton County, Ga., asserting she would find "dishonesty" there. He also told her that she had "the most important job in the country right now."

It linked to a new story about the recording, adding: 'The headline and text of this story have been corrected to remove quotes misattributed to Trump.'

The Post was slammed for the mistake, with journalist Mary Katharine Ham writing on Twitter: 'So, they made up quotes. What in the actual F.'

Another added: 'This is disgraceful. People on the left believed this garbage, and won’t even read this “correction”.'

Independent journalist Kyle Becker added: 'The ironic thing is that intelligent people knew this was made-up BS from the get-go.'

DrunkenBastard said:
So apparently the reason used was failing to moderate. But what about Twitter and Facebook groups which arguable had more use for planning of the capitol riots?

My understanding is that during negotiations with AWS to resume services Parler offered to use some kind of Amazon owned content moderation tool, but AWS said that wasn't good enough....
Click to expand...

Twitter and Facebook are more complicated. They host their own content last I've read so that wouldn't be up to AWS to ban, etc. I would hope that any groups or postings advocating any violence such as the capitol riots would be banned and reported to authorities.

What amount of Parler would you say was used as a conservative forum versus any other topics? It could just be unfortunate that a few bad users ruined it for the rest and no amount of moderation would suffice for AWS to take the risk to be associated with them.

I don't follow what side of the political alignment Bezos supports, I don't really care for him much regardless.

The majority of press news I'll listen to these days is either Associated Press or Reuters. I don't follow the Washington Post at all. That's shitty if they misquoted him and confused people. Sounds like they're making a play like fox news.

What are your thoughts on Sidney Powell and her defense strategy for being sued? Is she saying her claims of election fraud are not fact and reasonable people wouldn't accept her claims as such? She seemed pretty adamant every time she was on television about her claims. 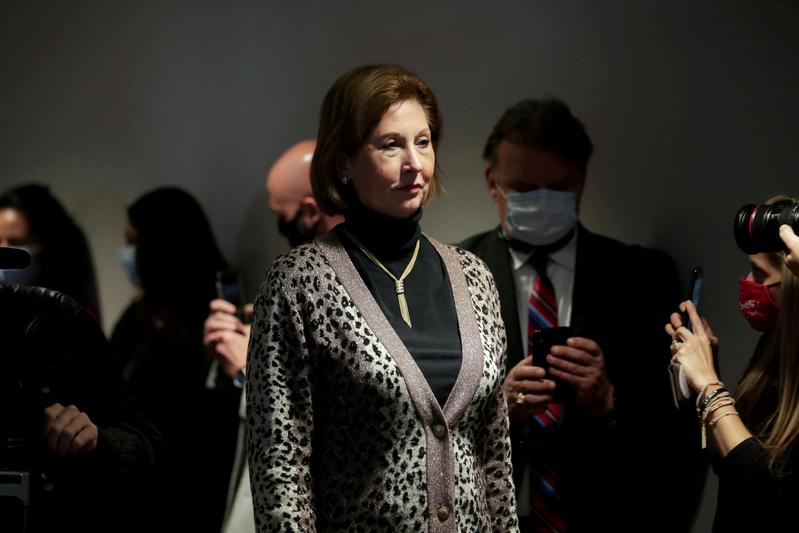 Sidney Powell, a lawyer who advised President Donald Trump's campaign, asked a judge on Monday to throw out a $1.3 billion lawsuit accusing her of spreading false conspiracy theories about the November presidential election.

reasonable people would not accept such statements as fact but view them only as claims that await testing by the courts through the adversary process.
Click to expand...